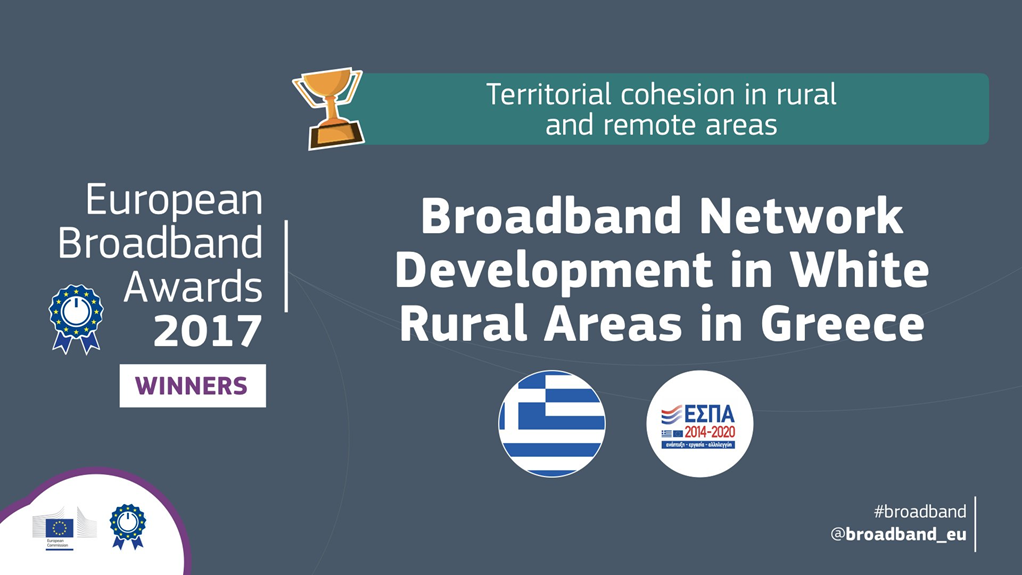 The project entitled “Development of broadband networks in white rural areas” is a national initiative funded by the European Union and national resources. It is an action of the National Broadband Access Plan of the Next Generation, distinguished in the context of the 2017 European Broadband Awards.

The object of the project is the development and operation of high-speed public broadband infrastructure in “white” rural and island regions of the country, subject to technological neutrality and the prospect of their exploitation by private-sector telecommunications providers.

■ It was implemented in regions where there was no investment interest from private telecommunications companies, due to their low commercial value, aiming at eliminating the “broadband gap” between remote, disadvantaged, traditional “white rural areas” and speeding up their digital convergence with the privileged regions of the country.

■ It covers almost 45% of the Greek territory by providing affordable and reliable connectivity services with a bandwidth of up to 30 Mbps and the ability to gradually increase speeds of up to 50 Mbps to around 525,000 citizens of the 5.077 municipal districts of rural and borderland mountainous and island regions.

It is estimated that the increase in broadband penetration by around 8% will have a positive impact on economic growth of 1.2% in these sparsely populated areas of the country.

Among the most important digital quality services to be provided through next generation networks is the increase in public sector productivity as it is a key consumer of broadband services and is expected to play an important role in linking public buildings to “white” rural areas.

This public intervention is fully in line with the objectives of the Digital Agenda 2020 and in particular the thematic pillar on “Internet access with high and ultra-high-speed connections”.

It provides satisfactory end-user interconnection services at speed, quality and price levels comparable to those of the preferential areas so as to reduce the risk of widening the digital divide.

It helps to strengthen effective competition between providers and to make it easier for existing providers to implement their own private investment strategy in intervention areas.

The innovative investment model of the project for the implementation of the combination of two European Structural Funds within the framework of the Public-Private Partnership (PPP) is based on the DBFO (Design, Build, Finance and Operate) logic and concerns the full public financing of capital expenditure.

A tangible example of the immediate outcomes of the project is the case of distant nursery schools and primary schools in mountainous local communities in the prefecture of Pella in northern Greece which are able to equip their school laboratories with educational digital media via broadband internet.

The project participated in the European Broadcasting Prize Competition 2017 and was awarded the 3rd category titled “Territorial cohesion in rural and remote areas”.