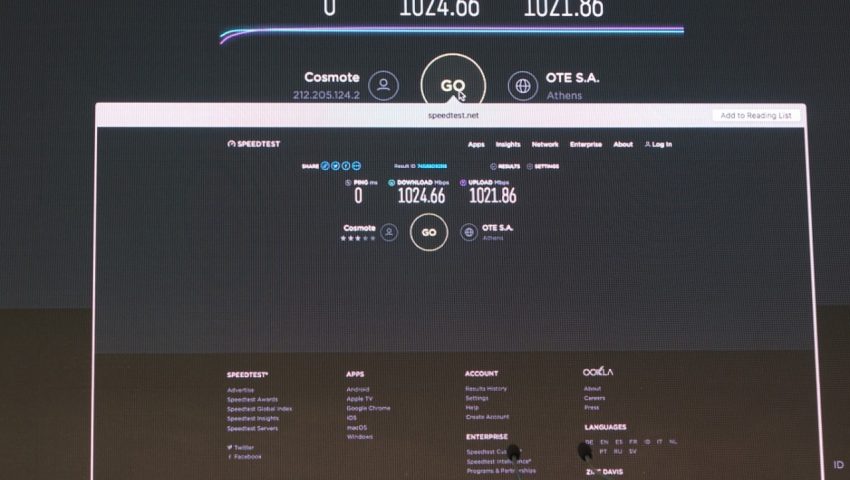 The Minister of Digital Policy, Telecommunications and Information, Nikos Pappas, attended an event today and activated the first Fiber To The Home connection of OTE Group.

The event took place at the premises of OTE Group, in Palaio Faliro, in the presence of the Secretary General of Telecommunications and Posts of the Ministry of Digital Policy, Technology and Communications, Vasilis Maglaras, the City Mayor Dionysis Hatzidakis and OTE Group Chairman and CEO Michalis Tsamaz.

On a live show that followed the activation process, fixed-line speeds of 1Gbps were achieved, highlighting the unlimited capabilities of fiber optics.

The connection of the house with the fiber optics was carried out within the framework of the action of the Ministry of Digital Policy, Telecommunications and Information, Superfast Broadband, which fully subsidizes the upgrading of Internet connections for home users and traders on ultra high speeds (more information on the action and acquisition of the subsidy voucher at www.sfbb.gr).

At his closing speech, Nikos Pappas said: “The speed at which the fiber optics network is developed is a model for co-ordination of local, private and governmental forces. It is an example of strong public intervention, which has, as of the first moment, aspired to multiply private investment. At the same time, it shows that the private sector can seek its interests in the general interest of society and not against it.

fiber optics and motorways are the largest investments of the last years. In this context, we are determined to channel additional public resources, so that before 2025 to have exceeded our goals for the Gigabit Society.

fiber optics expansion, through public and private investment of 4 billion euros over the next four years, is at the heart of new growth. It is an investment that will make Greece a hub of Fair Development in the wider region, a center of global telecommunications and investment charter, as well as economic developments”.

For his part, the Secretary General for Telecommunications and Posts of the Ministry of Digital Policy, Technology and Communications, Vassilis Maglaras, noted: “From the very first moment, we set out to unravel Greece from the copper age. After a great deal of work, we managed to have in our country the largest proportion of public investment in broadband infrastructure in Europe, as it will exceed 700 million in the next five years. The launch of the first action on fiber optics connection at home and the expected high speed internet achievement confirms the expansion of broadband services in the country. Greece is changing its pace and households and businesses now have the opportunity, through Superfast Broadband action, to take advantage of the latest technologies.”

The Mayor of Palaio Faliro, Dionysis Hatzidakis, stated: “fiber optics will contribute effectively to business growth, a growth that our country needs. I wish the work started by our municipality to become property of every Greek, either in the city or on a remote island or village. The new generation to use networks in its education and entrepreneurship, contributing to the effort to grow a Greece we need. “

OTE Group Chairman and CEO Michalis Tsamaz noted: “An integral part of our technological plans has always been the fiber to reach home. Today we prove that we are consistent with what we say by activating the first Cosmote Fiber To The Home connection. With realistic steps, a specific strategy and investment plan of 2 billion euros by 2022, we will bring the fiber into more and more households and businesses on the way to the Gigabit Society. Through the next-generation networks that we create across the country, we create unique communication and entertainment experiences. With technology we make a world, better for all. “

It is noted that the development of the technologies of the future is a key priority of the Ministry of Digital Policy, Technology and Communications and specific interventions, with a total budget of € 700 million, are being launched in this direction. In this context, private investment of 3 billion Euros has been launched for the next few years.